You are here: Home / Beginners Info / Does Airstream Make a Toy Hauler? 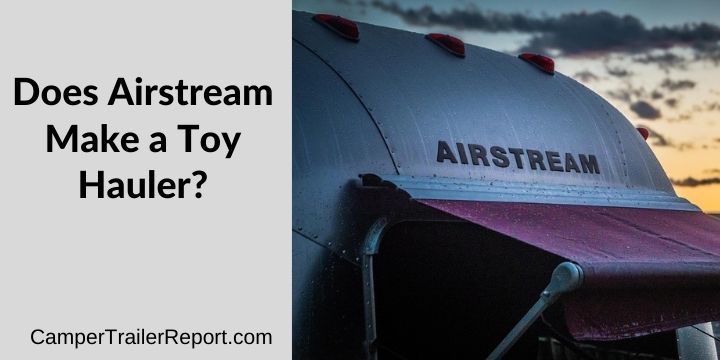 Does Airstream Make a Toy Hauler?

The only Toy Hauler designed by Airstream is the Airstream Panamerican. The Toy Hauler was built back in 2009 and it a trailer that was designed to tackle all kinds of adventures in the U.S. as a toy hauler enthusiast, you might consider looking at Airstream to get a product that you want.

Furthermore, in the United States, Airstream is the leading producer company for trailers and RVs. Nonetheless, you should note that toy haulers are often not produced by all the RVs companies. With that in mind, Airstream is said to have only made one toy hauler; the Airstream Panamerican.

What Is a Toy Hauler?

You can describe it as a cross between a travel trailer and a cargo trailer. The front of the toy hauler has been designed as a living area with a bathroom, bedroom as well as a kitchen. In addition to that, it serves as storage like any other trailer.

There are several features incorporated in a toy hauler which makes it relatively appealing compared to a standard trailer. First and foremost, a toy hauler features a self-contained design which means that you will access all essentials packed in your trailer.

Furthermore, a toy hauler is equipped with a large freshwater reservoir that is built in the trailer along with an in-built generator. An in-built generator helps in powering the microwave, fridge, and air conditioner, among other vital appliances.

In addition to that, a toy hauler features a relatively tall and wide dimension compared to a standard trailer. The best part is that their maximum width is allowed on public roads. Furthermore, toy haulers come equipped with collapsible furniture including, couches, beds as well as tables.

This design offers you plenty of space for relaxing and moving around while at the campsite. Compared to a standard trailer, a toy hauler is very durable.

What Is the Airstream Panamerican?

When Was the Airstream Panamerican in Production and How Many Were Made?

The company was aiming to market their toy hauler to individuals who wanted to transport their ATVs and motorcycles. Nonetheless, the main aspect that leads to the discontinuity of Airstream Panamerican production was its price. The toy hauler was relatively expensive compared to their target audience.

Who makes the best toy hauler?

With different companies out there designing toy haulers, choosing one that will best suit your needs can be a bit challenging. Knowing who makes the best toy hauler should always be your top priority as a toy hauler enthusiast. Well, there is no doubt that Jayco produces some of the best toy haulers available in the market.

Does Winnebago make a toy hauler?

Yes, Winnebago makes some of the best toy haulers in the market. Their new SPYDER toy hauler is by far one of their best product you can find on the road. This Winnebago toy hauler offers a well-balanced list of standard equipment, and it is well-upgraded to best suit all your traveling needs.

Does Jayco make a toy hauler?

Jayco is known for making the best toy haulers out there. Jayco toy hauler is not only durable but also highly versatile. They feature several models as well as floorplan options for you to choose from. Their Jay flight octane and the 2021 Talon are some of their outstanding toy hauler available in the market.

Do airstreams hold their value?

There is no doubt that Airstream holds its value way better than any other brand out there. Just like any other car, when you purchase a brand new Airstream, it will lose a portion of its value once you take it off the lot. Likewise, when you buy a used one, you will end up saving money and sell a year or two at the same amount.

> You may also like: Least-Visited National Parks: Why They’re Worth a Look<<